The launching of the 2nd international Conference of Alexandria University 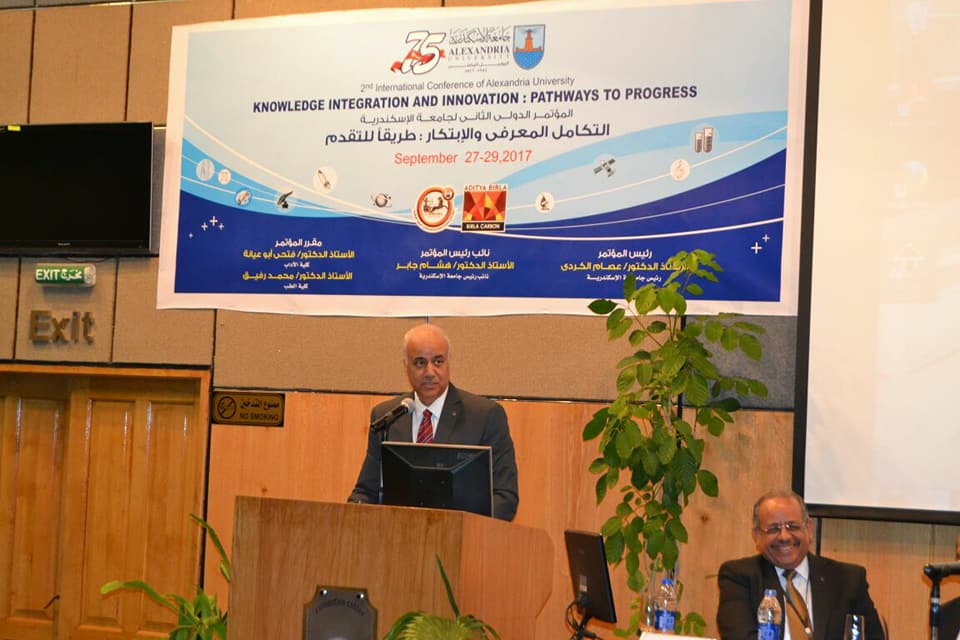 In his speech, Prof. Essam El-Kurdi said that this conference is a continuation of the approach of knowledge integration between all the scientific, humanities, basic and practical disciplines. He also referred to the role of the university in Egypt that extended to the Arab and African countries through its branches in South of Sudan and Chad as well as cooperation relations with many international universities, that reflected on the position of the university in the world rankings of universities such as the Times Higher Education Ranking and Shanghai Ranking.

AU vice President for Education and Student Affairs Prof. Hisham Gaber, said that the conference comes in a transition period in Egypt where we need to apply the integrated scientific approach to face the problems of the community. He stressed on the necessity to work on the investment in education outputs for the benefit of the country and citizen to achieve a better future for current and future generations.

Prof. Dr. Fathi Abu Ayana, the Professor in the Faculty of Arts and the Rapporteur of the conference said that the Arab and Islamic civilization had a leading role in the integration of knowledge and the establishment of a lot of sciences, the humanity bears the fruit today as many Arab intellectuals were masters in basic science and most of them applyed the principle of knowledge integration, which became the hallmark of developed societies that adopted an integrated system in the scientific knowledge to take the advantage of modern science for society development and upgrading.

Prof. Mohammad Rafiq Khalil, the Professor in the Faculty of Medicine underlined the role of the university as an entity in which all the disciplines are existing and cooperating as one system.

Prof. Dr. Ahmed Othman the Dean of the Faculty of Medicine in his speech said that Egypt throughout the ages had many scientists who represented a form of knowledge integration like Imhotep, who was a doctor, philosopher architect and artists, in addition to Aristotle, Ibn Sina and Ibn Rushd, while in modern times there is Einstein and Mustafa Musharafa.

The opening ceremony was attended by the AU former presidents and vice presidents as well as faculties deans and deputies and faculty members. The ceremony included a documentary film about the university on the occasion of the 75th anniversary since establishment.