Eng Mehleb stated that there is development in all the Egyptian land that provides a message to the youth who should continue building and save these achievements. 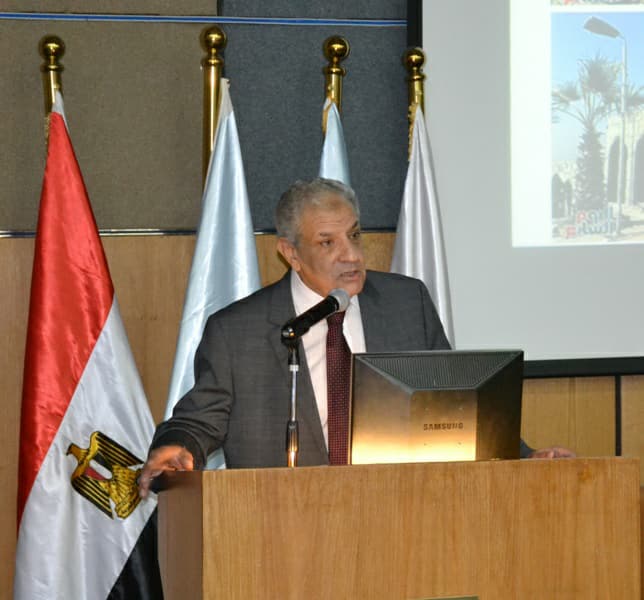 Alexandria University President Dr. Essam El Kurdi stated AU appreciation to on Eng. Ibrahim Mehleb, the Presidential Assistant for the National and Strategic Projects for his distinguished contributions and all efforts in the service of the country and citizens since he was Manager of Arab Contractors Company then Minister of Housing then Prim Minister.

This came during held on Wednesday 21st of February 2017 within university celebration of the diamond jubilee and included a presentation on the national mega projects and achievements in various fields in Egypt. The meeting was attended by Alexandria Governor Dr. Mohamed Sultan, Major Amir Sayed Ahmed the Presidential Advisor, Major Ali Eshmawy Amr Shobokshy; Commander of the Northern Area, Dr. Hossam Moghazy the former Minister of Water Resources, Dr. Said Abdel Aziz the former Governor of El Sharkia and a group AU former Rectors and deans.

The university President also thanked the Commander of the Northern Area and the national leaders who participated in the meeting and presented the projects implemented by the military forces in collaboration with the Faculty of Engineering since 2014 till now especially the project of Bashaier El Khir and Mahmoudia road development.

Eng. Mehleb represented the national projects that were implemented in Egypt that aims to achieve economic balance and social justice according to the strategy set by the President Abdel Fattah El Sisi with highest quality and lowest price in a very short time.

He also discussed the challenges that are facing Egypt since 2013 and the governmental plan to face these challenges with more projects that shall contribute in the economic growth such as the national road network of 7000 Km with a cost of 84 billion EGP to connect all the Egyptian cities in addition to Suez Canal Axis development project, fisheries, logistics areas and new cities.

At the end of the meeting, Eng Mehleb stated that there is development in all the Egyptian land that provides a message to the youth who should continue building and save these achievements.