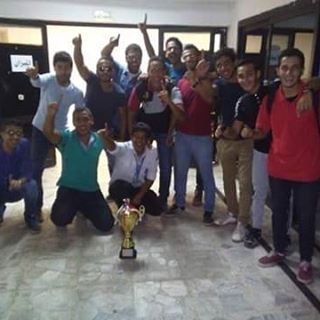 ·    Opening gyms for student members of the three clubs all week round.

·    Organizing and activating sports tournaments for clubs and students leagues at various times of the year, covering the following games:

·    Organizing matches between the students of Alexandria Club and the National Bank team on the courts of Somoha Youth Sports Center all year round.

·   Organizing external and internal matches between the members of clubs and youth sports centers and the members of Hollo Lido, the Christian Youths; and youth players of the Paper Company in Alexandria.

·   Organizing a summer sports tournament on the courts of Al-Waili Youth Sports Center for the members of Emad Al- Din Club, and Emad Al-Din Club 2.

·    Organizing Ramadan sports tournaments for the members of foreign students clubs in different games during the holy month of Ramadan.

·     Organizing games between the clubs teams and the teams of universities and faculties, covering all activities (football - ping pong - chess).

·    Preparing sports magazines covering all sports activities on the level of the General Administration for Foreign Students Activities.

·    Preparing special registers for sports teams for each of the three clubs.

·    Taking measures for purchasing fitness apparatuses for the three clubs.

·    Opening gyms in the foreign students clubs all week round as well as offering regular daily training in the fitness centers.

·  Organizing sports tournament between clubs and students leagues in (ping pong - billiards), as well as participating daily with the members of the clubs in billiards all year round.